WordPress 3.2 brought the introduction of the “distraction-free” editor. Its aim was to clean up the editing space and allow authors to concentrate on their content. It is an undeniably beautiful feature, but in stripping down the editing screen, distractions were not the only things removed. The “kitchen sink” was removed as well (For those not familiar with the “kitchen sink” it is the second row of buttons in the WordPress editor). Many authors (such as myself) rely on the buttons available in that second row. Consequently, as nice as the distraction-free editor was, we just couldn’t bring ourselves to use it due to the limited functionality. However, all is not lost. After trying in vain to find a way to display the kitchen sink in the distraction-free editor, I came upon what appears to be a little known feature of the WordPress editor.

After obligatory image of the distraction-free editor below, I’ll show you the alternative “fullscreen” editor which I now use regularly. 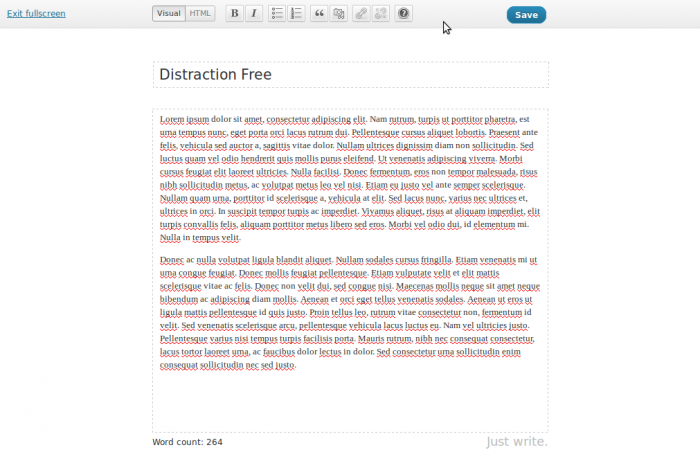 See? Isn’t it beautiful? But where is the kitchen sink? 🙁

Now allow me to introduce you to the fullscreen editor, with the kitchen sink intact. 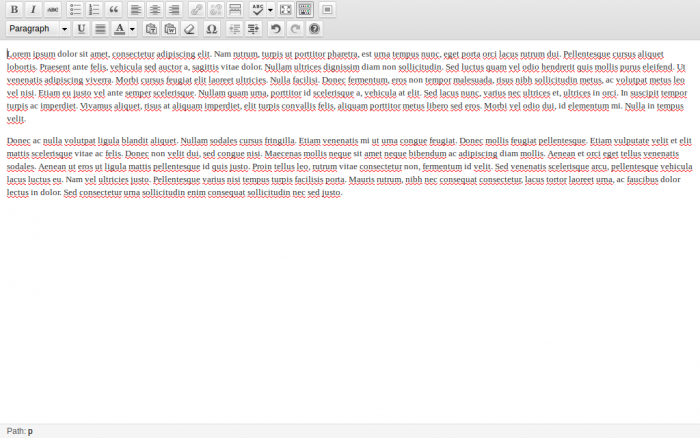 Now I’ll be the first to admit, it isn’t as beautiful as the distraction-free editor, but what it lacks in beauty, it makes up for in usefulness. How do you enable the fullscreen editor, you might ask? There’s no “fullscreen” button to be found anywhere (at least not that I could find). To access the fullscreen editor, you’ll need to click inside the standard page/post editor in order for it to capture the keyboard focus. Once the cursor is in the editor, hold down Alt+Shift+G on the keyboard. Surprise! The editor itself takes up the full screen! That’s it. Holding down Alt+Shift+G again will take you back to the standard editor.

To be honest, I think this “feature” was probably built into the TinyMCE editor that WordPress uses and isn’t specific to WordPress. Nevertheless, it’s a handy feature for those of use who want a fullscreen editor but can’t give up the kitchen sink.

For those of you who want to dig a little deeper, here are the WordPress files that enable this feature:

I mentioned at the beginning of the post that the keyboard shortcut for this feature was removed from WordPress starting at version 4.5. However, Andrew Ozz posted the following section of code in the WordPress Trac that will add a toggle button for the full screen editor.

This code can be placed in the theme’s functions.php file if you don’t have any other place you particularly want to put it.

Please note: The icon is the same as the distraction free editor icon. Their location in the row of buttons will be the easiest way to tell them apart.