Every so often I switch computers or reinstall my OS and end up searching around the web for the exact steps to get everything working again. Today, as I set up my OS again, I figured I might as well document the process. Since Linux Mint is based on Ubuntu, I think that these steps (at least most of them) should work for Ubuntu users as well.

There are plenty of tutorials around the web explaining exactly how to install Linux. Today I’m going to skip straight to the steps I take immediately after the OS installation in order to turn Linux into a tool for web development.

LAMP stands for Linux, Apache, MySQL, and PHP. The first letter of the acronym (Linux) is already installed, so we don’t need to worry about that. Some people prefer servers other than Apache, databases other than MySQL, or languages other than PHP. However, I think these are the easiest to set up and since I spend the majority of my time working with WordPress, this setup suites me well. There is a handly little tool called “tasksel” that will make the installation of the LAMP stack quite painless. We can use the following command to install this tool from the command line:

Once tasksel is installed, it can be run using the following command:

This will bring up a selection dialog within the terminal that will let us easily add additional functionality to our OS. In this case, we want to use the arrow keys to navigate to the LAMP server option and press the space bar to select it. 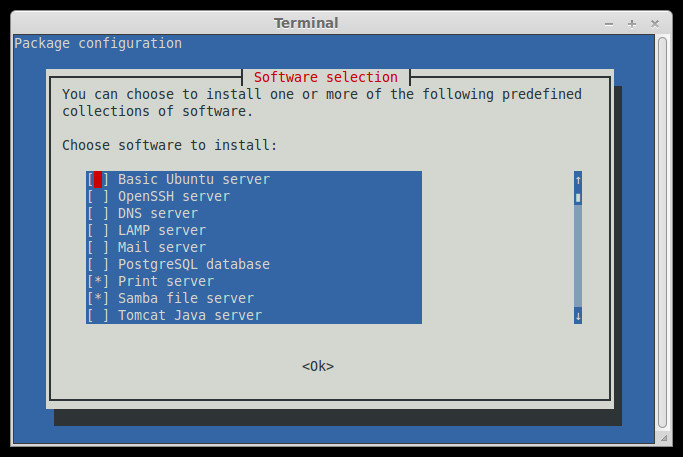 After this we can hit enter and tasksel will go about installing most of the pieces we need. Part way through the installation process, we will be prompted to create a password for the MySQL root user, but other than the, the process is all automated.

Once this process is finished, visiting http://localhost/ in our browser should display a page titled “It works!”

Just to make things easier, at this point I like to go and change the permissions of the /var/www/ folder (localhost). I set my normal/default user as the owner so that I don’t have to switch users when adding/editing files on the server.

I prefer to use a GUI to mess around with my databases. The following command will install phpmyadmin to hande that:

This will lead to a few more dialogs. The first will ask which sever we’re using, and we can select apache2. Next we will be asked if we want to configure the dabase for phpmyadmin with dbconfig-common. I have always selected the default value “yes” because I don’t have any reason not to. Next, we will be asked to enter some passwords. I don’t remember the exact wording of the prompts but entering the same password we entered in step 2 will work.

Once this process is complete, phpmyadmin should be accessible by going to http://localhost/phpmyadmin/ in our browser.

This is optional. However, I prefer to configure everything to run as my default user, so I can more easily work with the files involved. The first step to accomplishing this is changing the permissions of the following folder:

There are a few different ways to make these changes, but I typically just open the file manager as the root user, navigate to the /var folder, right click the /html folder, and change the owner and group permissions to my default user.

Next, I typically bookmark the /html folder in my file manager and my browser, naming them both “localhost” for future reference.

There are a number of PHP settings that are a little too throttled, in my opinion. For example, maximum upload sizes and maximum execution time. Rather then document it all here, I’m just going to link to a tutorial that shows how to easily change these PHP settings in Ubuntu/Mint.

I’m not going to explain this step because it is already well documented in the WordPress Codex. However, I’ve added it to the list here because:

The mod_rewrite module is what allows things like “pretty permalinks” in WordPress to work properly. For some reason, getting it working with Ubuntu/Mint is trickier than it should be. In fact, I’ve run into this issue so many times that I’ve already covered it in a different post.

Many of my projects are hosted on GitHub or Bitbucket, so the easiest way to add them to my new machine is with git. This command will install git from the repositories:

I’ve just started using Grunt and I’m impressed at how well it automates tasks and how easily it allows me to make use of more advanced tools such as SASS, JSHint, etc. Node and npm can be installed easily with the following command:

Note that only npm is listed, not node. Ubuntu/Mint will automatically calculate the dependencies that are required and install them as well. This includes the nodejs package. This is helpful because there is another package in the repositories simply called “node” which is not the right package and can cause some confusion. Once npm is installed, the Grunt Command Line Interface can be installed with the following command:

This does not install Grunt itself. The grunt-cli package simply adds the grunt command to the system path so that it can be run from any directory. Grunt itself must be installed locally within each project where it is used. For more details on installing Grunt, I would recommend reading this post on installing Grunt by Stephen Harris.

As mentioned earlier, the Node.js package is named nodejs in Ubuntu/Mint. However, some scripts will be looking for “node” rather than “nodejs” so it’s best to create a symlink between the two using the following command:

You’re obviously free to use whatever text editor or IDE you prefer, but I personally prefer Sublime Text. Sublime can be installed with the following three commands, one after the next:

If you’ve purchased a license, click Help > Enter License in the menu and past your license key in the input box. That’s it!

If we’re going to use SASS, and specifically the grunt-contrib-sass grunt plugin to compile SASS, we’ll need to install the SASS Ruby gem:

So that’s how I set up my local development environment. I left out IDEs/code editors because almost everyone has their own preference and if you have a preference, you probably already know how to install it. I personally use Sublime Text, but like I said, that’s personal preference. I also use VirtualBox to install virtual copies of Windows for testing various browsers, but that’s outside of the scope of this article.

Is there anything else you do to get your local development environment up and running? If so, I’d love to hear about it!

Other things that might be necessary depending on your requirements:

6 thoughts on “Setting Up Ubuntu/Linux Mint for Web Development”